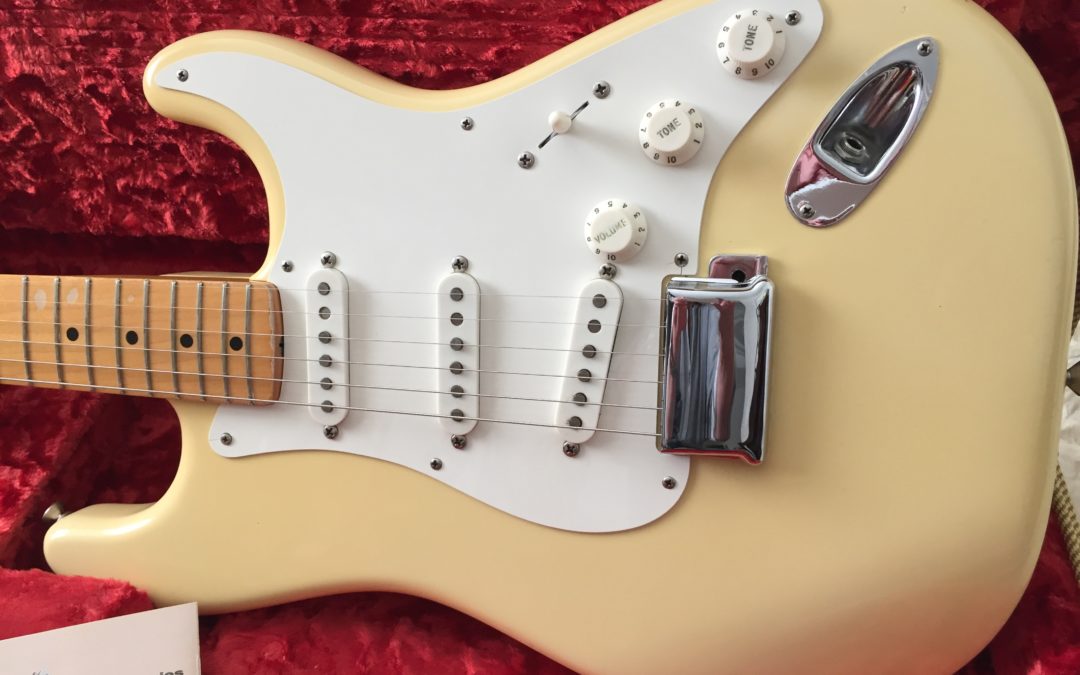 Despite the innovations brought with the Smith Strat, The Strat, the introduction of the Gold Stratocaster and the Walnut Strat in the early 80’s, the passion of guitarists towards the Stratocasters of the ’50s and ’60s showed no sign of diminishing. For this reason Dan Smith thought the time had come to build instruments inspired by the historic guitars of the past…the Vintage Series Reissues. The project consisted of classic models of Telecaster, Stratocaster, Precision Bass and Jazz Bass. We have some first hand details of this period from R and D Masterbuilder Scott Zimmerman. It was 1980 that Scott took over the job as Masterbuilder, a job of which there was only ONE; John Page was his predecessor. 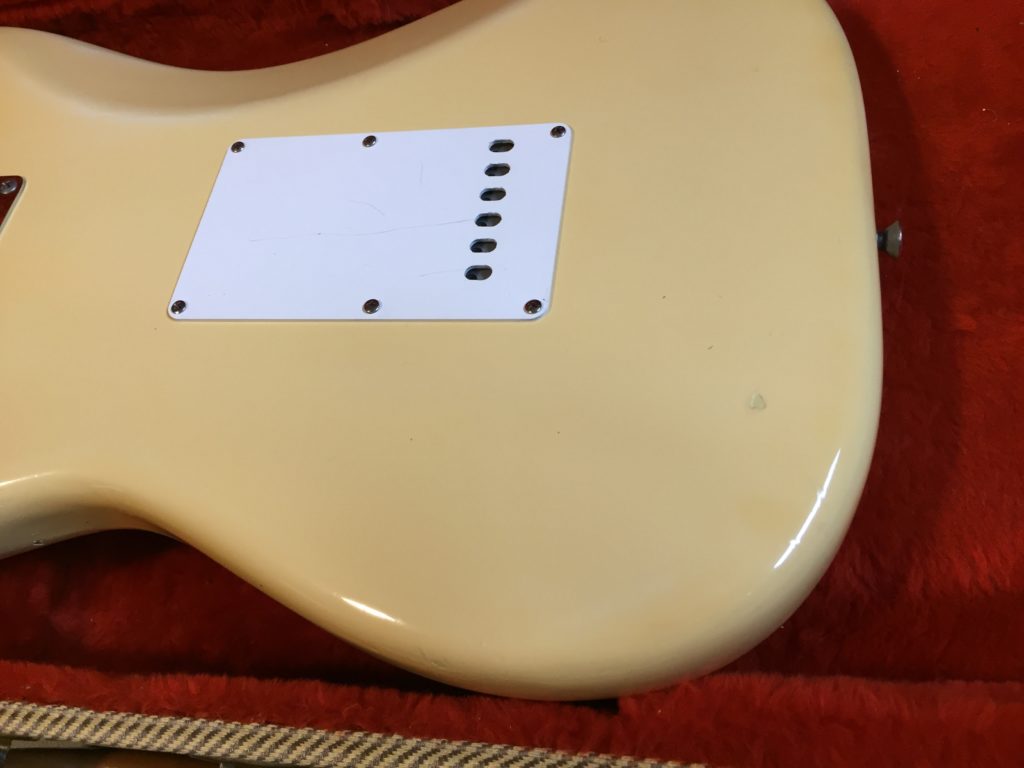 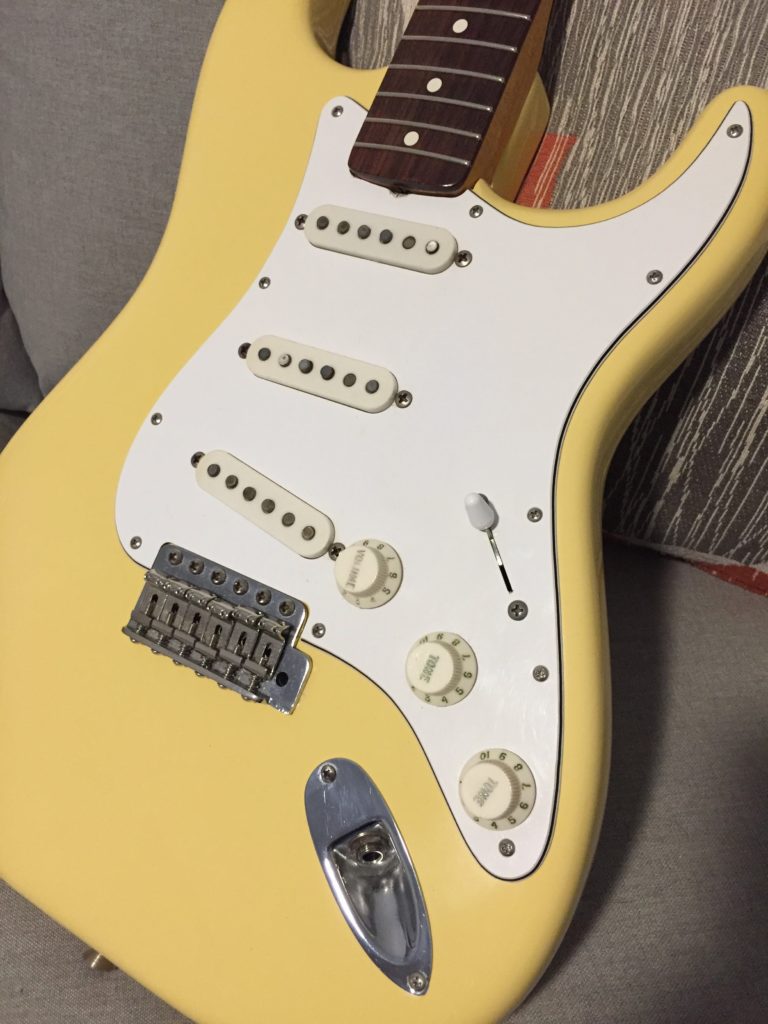 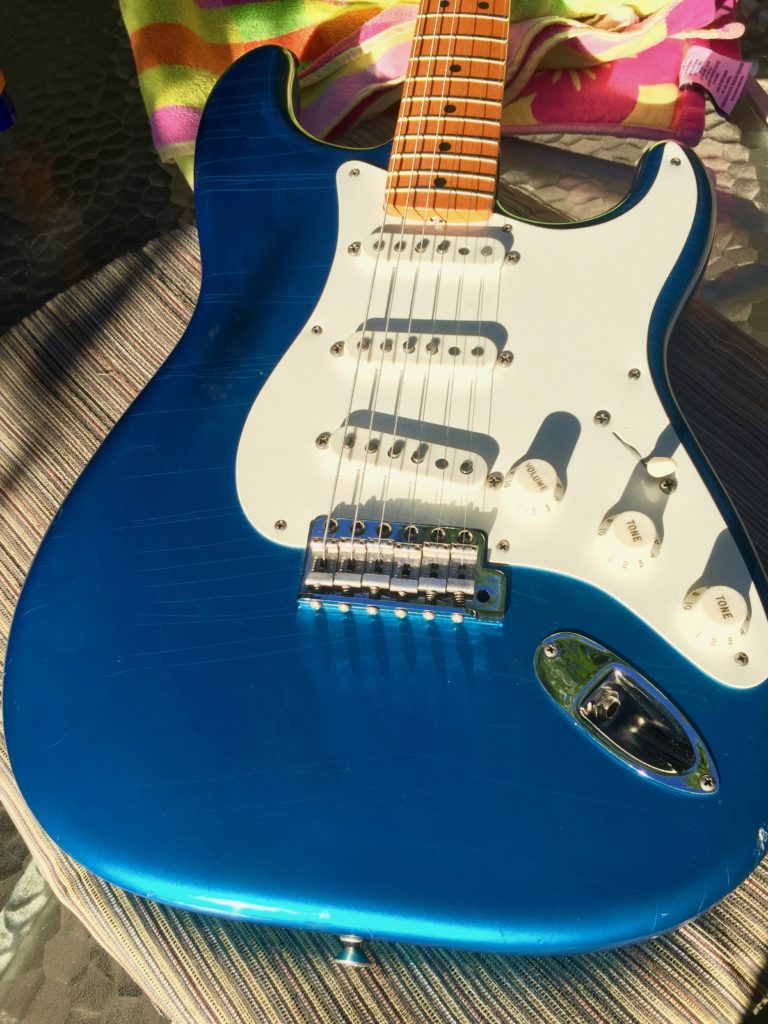 We need to be clear on the Vintage Reissue Series and how it began. The common myth is that Dan Smith designed the first prototypes of the ’57 Stratocaster and ’62 Stratocaster in 1981. This is far from the truth so let’s discuss. It’s conception PREDATES both Dan Smith and Bill Schultz. The true roots began in the late 1970s, with a project of John Page and Freddie Tavares to release a Vintage Reissue 50s Telecaster. Dan Smith, together with John and Freddie ultimately provided the specs on the project. Together, after touring the United States in search of Stratocasters, Telecasters, Esquires and Broadcasters made in Leo’s time, they found many guitars. One such place was a store near Chicago called ‘The Axe in Hand’.  Ted Greene, Duck Dunn and Tom Bogert helped immensely along with a few artists and collectors of the day. It was after this travel/discovery time they would test and analyze many pre-CBS Stratocasters (1965 and older), using them as a base for the Vintage Stratocasters.

That same year, the prototypes were hand built by renowned Masterbuilder, Scott Zimmerman. These guitars were presented at the winter 1982 Anaheim NAMM show and MESSE (Japan). It was unfortunate with all the hype and desire from that show, the reissues were delayed and distributed much later in 1982…the entire Fullerton factory was overwhelmed with the orders that came in. These were the glory years for Fullerton factory production under the design direction from Dan, John and Freddie. Scott Zimmerman built each and every prototype by hand, and was instrumental in working with the line to get the guitars into production as designed.

According to Fender, the Vintage Stratocasters were exact replicas of the originals, but there were a couple of minor differences that were not in the plan:

In any case, the reissues were excellent reproductions of the pre CBS era and still hold true today. They both had staggered poles pickups, small headstock, vintage style hardware and nitro finish with polyester undercoat. Moreover, the ’57 reissue had a single-layer pickguard and fretted maple neck, while the ’62 featured a 3-ply pickguard and maple neck with a rosewood fretboard. The entire 1982-1984 Vintage Reissues are coveted as some of the finest guitars made.

At the end of 1984, Fender closed the Fullerton Plant and moved to smaller facilities in Brea California…actually right next door. This location (Brea) was mainly offices with some assembly space. The necks and bodies were now being imported from from Fujigen, Japan. Yes…this is a fact! When someone tells you early Corona’s were the same as Fullerton AVRI’s…just smile and and move on. Now you know the truth. To directly quote Scott Zimmerman…”this is a great story in itself, American Standard…made in Japan!” We’ll cover this more in a future article…along with other gems.

By 1986, the new facilities in Corona were opened up and the first line of production crews began building the AVRI series here in California. The fine body sculpting-tapers that Scott Zimmerman built in Fullerton were revised for production time and costs reasons. Next time you hold a Fullerton AVRI…do not let go!

Thanks to our Fender hero’s: John Page, Scott Zimmerman, Freddie Tavares, Steve Boulanger and Dan Smith…these models renewed the electric guitar to come back into fashion. The reissues were the proof that Fender was still able to make excellent instruments. These men convinced Bill Schultz to start the group we now call CUSTOM SHOP. There’s another story or three here, but that will be for another day so stay tuned.

Improvement in production was due to a complete revision of the factories, which were now more capable to support the huge amount of production (from a numerical point of view), with a greater attention to quality. Simultaneously, the use of CNC (Computer Numeric Controlled System) allowed a more precise woodworking

It has been estimated that around fifteen thousand guitars of this type were built, known as “Fullerton Reissues” or “AVRI”. The neck plate serial numbers began sequentially, starting with V000001 in 1982. By 1985, as they moved to Corona they were at approximately V015000. It must noted however that no “order” regarding serial numbers was followed. Talking with many from the era, the numbered ‘plates’ were in various bins, already stamped and often the grab and use method was the order of the day. We are left with relying on neck pencil dates and pot codes to date this era accurately.

These are highly regarded guitars that were hand built to accurate specs. Custom Color choices were available in 4 options, Lake Placid Blue, Olympic (vintage) White, Fiesta Red and Black. Here they are ABOVE AND BELOW in all their glory.

The Custom color production was less that 5% of the total made that era, making these particularly desirable/collectable. Some, but very few, had NOS pickups; Grey Bottoms and Red Bottoms. Often times tags were glued in the neck pockets with the serial number that corresponded to the neck plate. V000001 to V001200 is the sequence associated with the year 1982. Of these, only about 150 had the NOS pickups grey or red, and only about 45-55 were painted in the 4 custom colors as above. Pickups and pot dates are illustrated in these photos below…very early red bottoms using the old thin plastic wire…soon to be changed to cloth by the end of 1982. To read pot code dates, the last 4 digits are the year and week. Example would be as seen further below: R1378206 is the 6th week of 1982.

Unfortunately, as demand for the 1982 models skyrocket, the inevitable ‘fakes’ started to appear. Fullerton Reissues were the target…they are very easy to spot if you know what to look for. Wire gauges, dowel marks, period sequential serial numbers and so forth.

Production moved to the newly constructed Corona factory by the end of 1985.  Production numbers skyrocketed and well, you know the rest of the story, Fender’s Custom Shop would take the world by storm!

This point in time (1986-1987) marks the beginning of the Fender Custom Shop. The top builders such as Michael Stevens under John Page and the then CEO, Bill Shultz formed an elite team that has seen some of the greatest talents come together. We’ll spend some time on these talented folks in later reviews.

Team Builds are called Custom Shop guitars and Single Builder models are Masterbuilt guitars. Under the teams direction the vintage series continued and is still an important part of Fender today. The most fun event each year is at the winter Namm show, were all the talented builders showcase a unique new guitar. These are sold instantly…and I dare say for breathtaking dollars! We’ll have some fun with that in future articles…here is one such example

In 1998, the AVRI series was renamed “American Vintage Series”, continuing on as a very highly regarded and desired series for Fender.

A special thanks to my friend Scott Zimmerman for providing some inside knowledge as Masterbuilder par excellence and Antonio Calvosa our Euro Stratocaster Infectionato !

My love is music…my passion is guitars. Since 1967 with paper route money in hand, I bought my first guitar and amp. Since then, some 50 plus years later my involvement within the industry has grown and now I am focused on players, musicians and collectors alike to help them keep their treasures, buy pieces that are special to them and help them get top dollar in the marketplace. Guitars ARE collateral in our world !