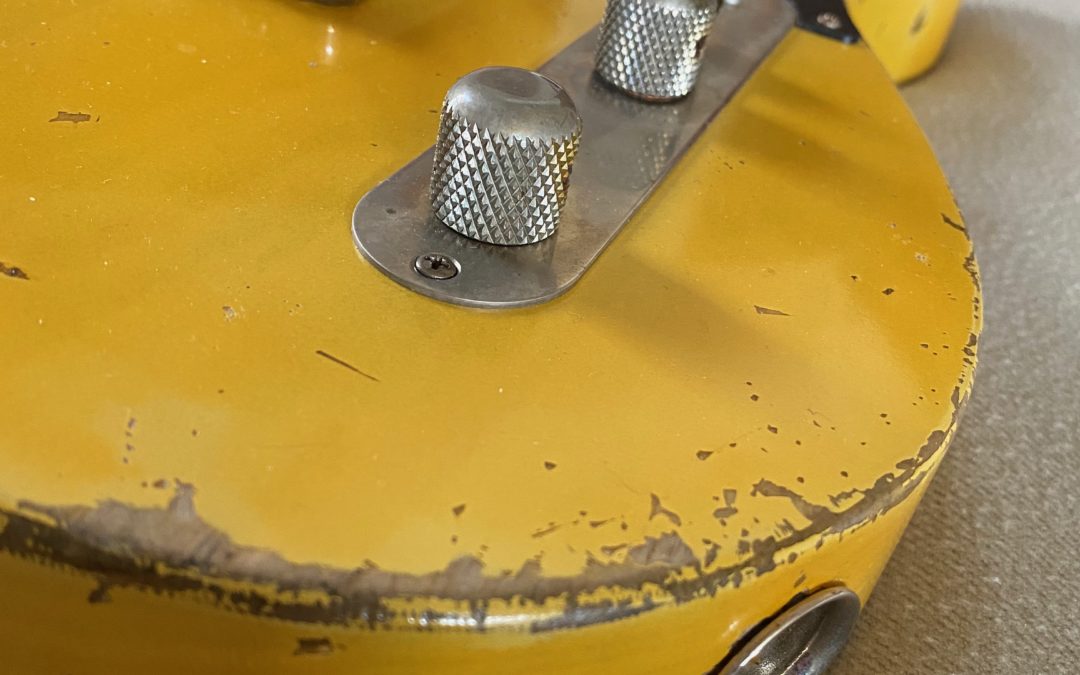 This is one very HOT TOPIC that brings much ire outta guitar folks from all directions. There’s no getting around controversy on this topic, and NO…I will not tread lightly! There is a ‘comments section’ below should you want to be heard…we will enjoy the points of view! 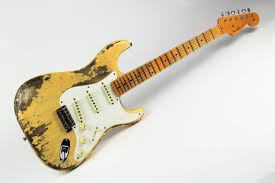 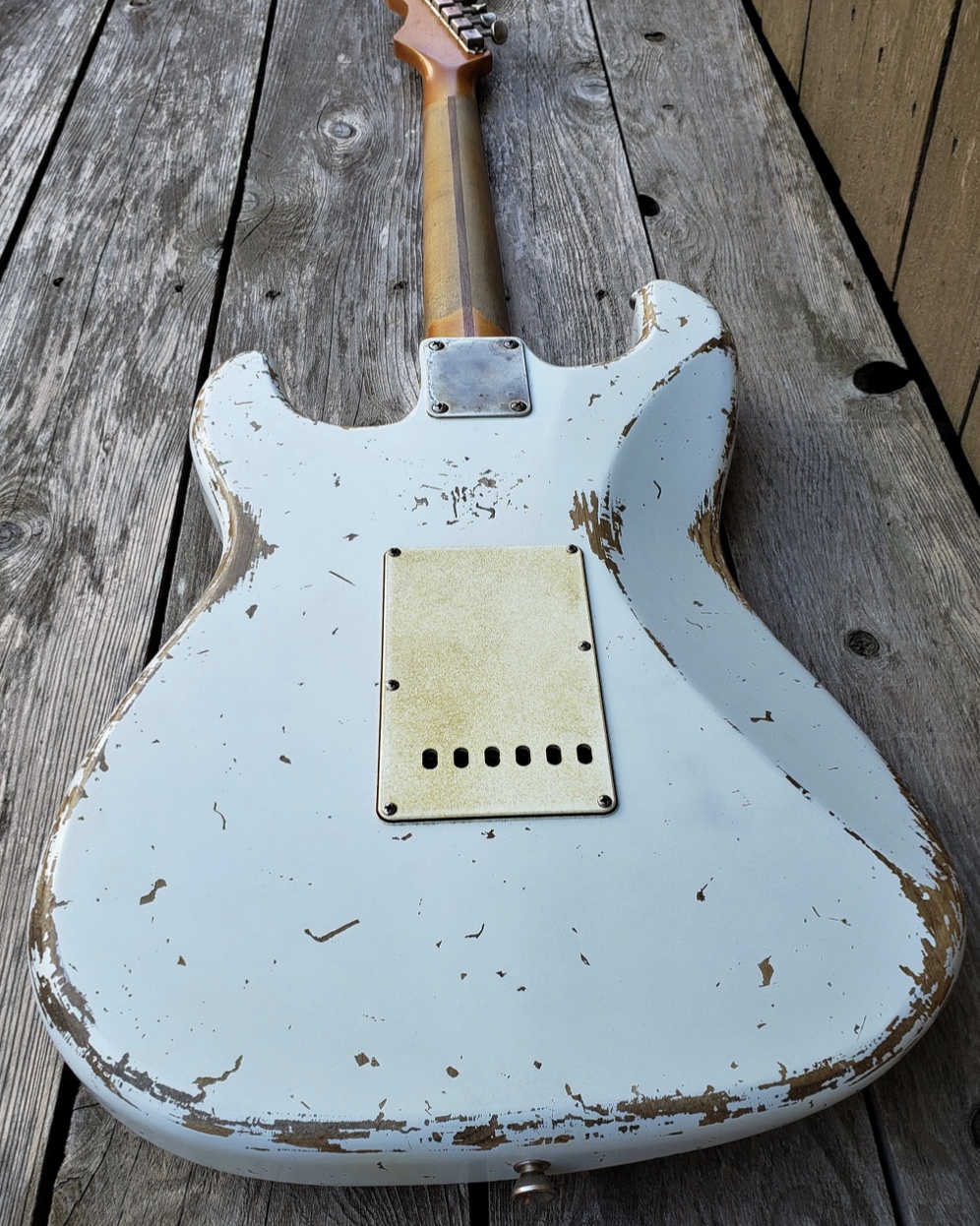 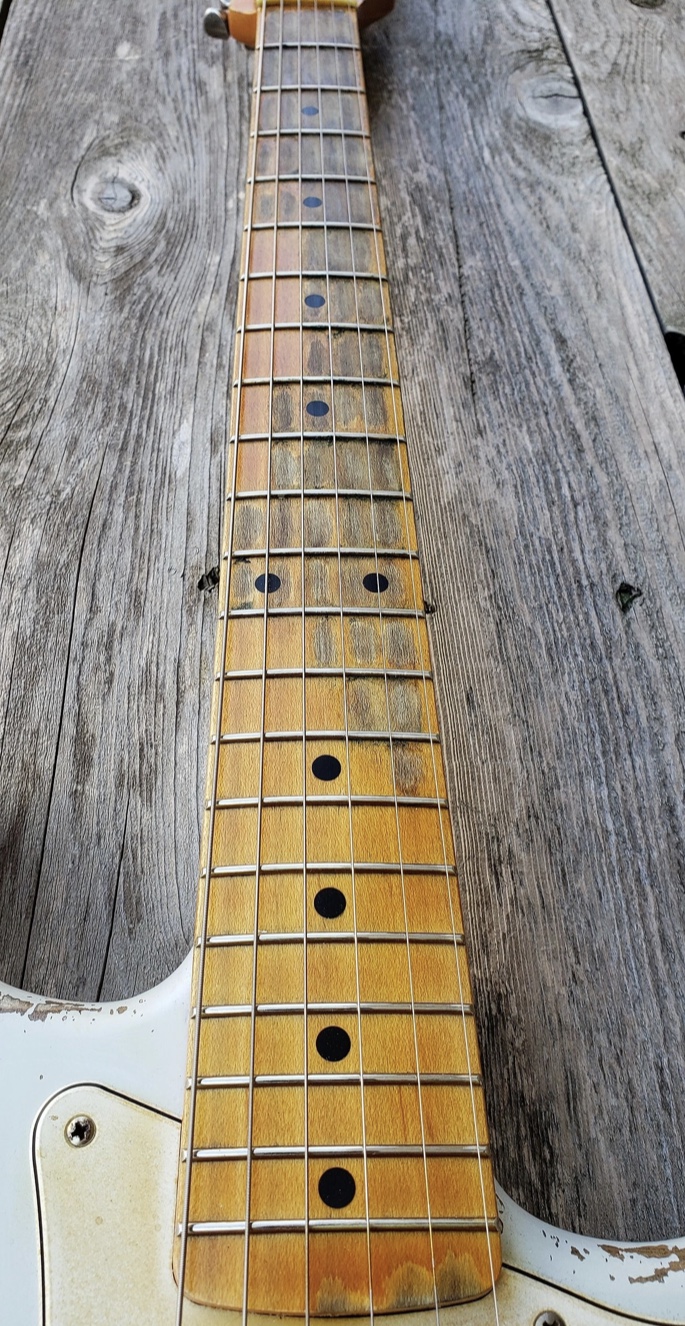 1….What does RELIC mean

3….What is the purpose of either one

Simple questions worthy of discussion, debate and opinions. To begin, a true vintage guitar made some 60 years ago is expensive. Not up for debate, they are in high demand and have a proven value retention factor that is based on Economics 101…low supply/high demand. I will skip the “why” factor and stick to the point…they just don’t make ’em anymore.

What is being made today is our focus…and we’ll stick to Stratocasters and Telecasters in this piece. Terms like road worn, heavy relic’d, time capsule, closet classic, museum piece and on and on are terms we use to describe the appearance of a guitar. Self explanatory and easy to understand, these terms define true vintage guitars as well as new builds and help us to compartmentalize the condition and appearance. With new guitars these terms describe the appearance…they are new after-all. 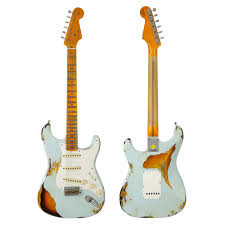 Question 1. Relic by definition means “something old that has survived”. In the guitar world, post 1986, relic has taken on a new meaning and is used to describe “something new made to appear old”. Guitar builders began adding ‘age’ and wear to guitars so they appeared old which appealed to many seeking a guitar that looked like SRV’s or Clapton’s etc…or just old period. Why? Well it’s all about marketing, adding patina and allowing some steps to be added thereby creating a higher monetary value. It worked, rather well in fact. Certain builders, both independent and company staff members became guitar stars…case in point, John English, Tom Murphy, John Cruz amongst many others. Their work became a “value add” and often we believed that better woods, parts and sculpting was/is part and parcel with their builds…their names are not only on the build sheets and COA’s, they’re also on the guitar! 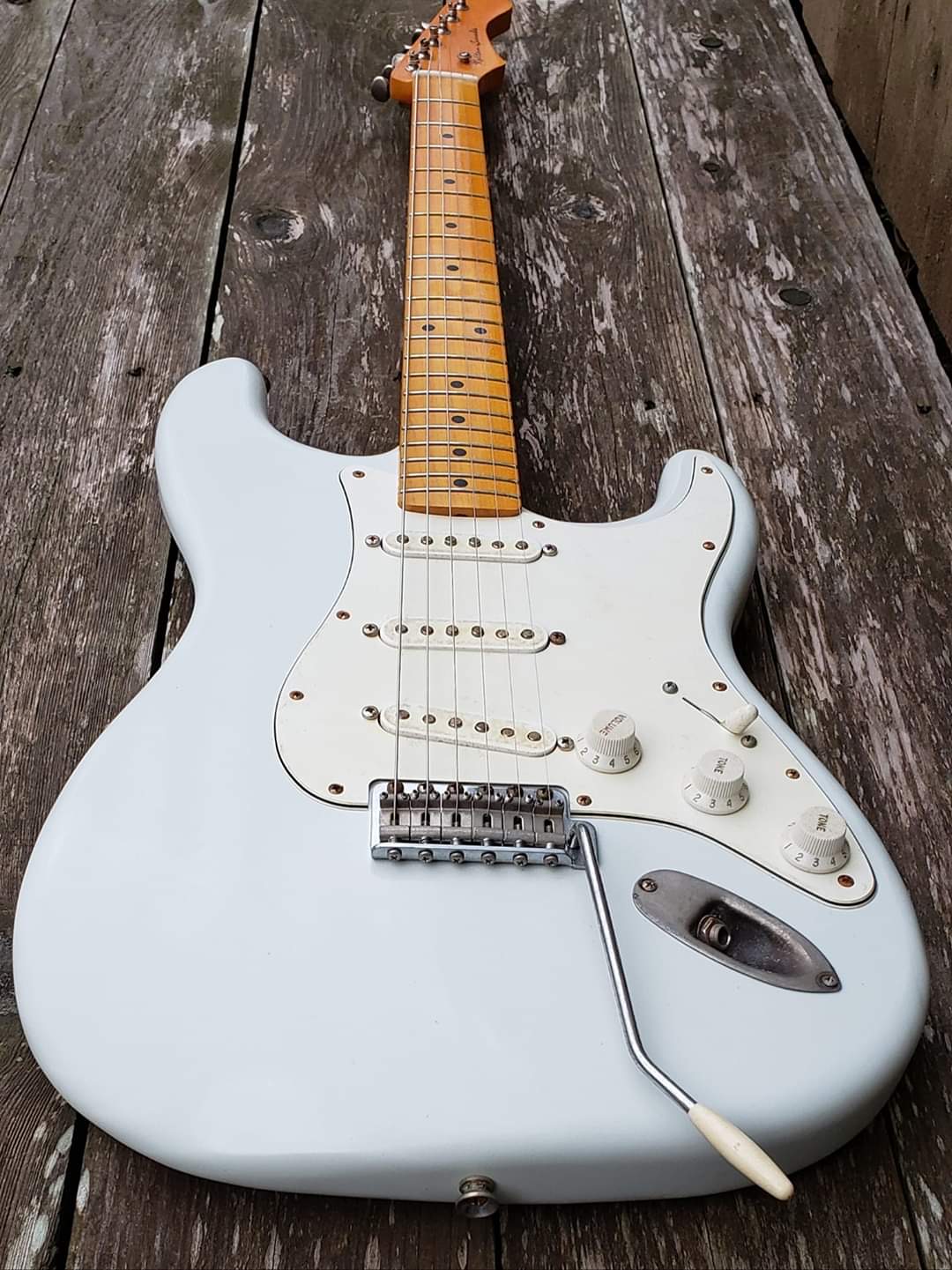 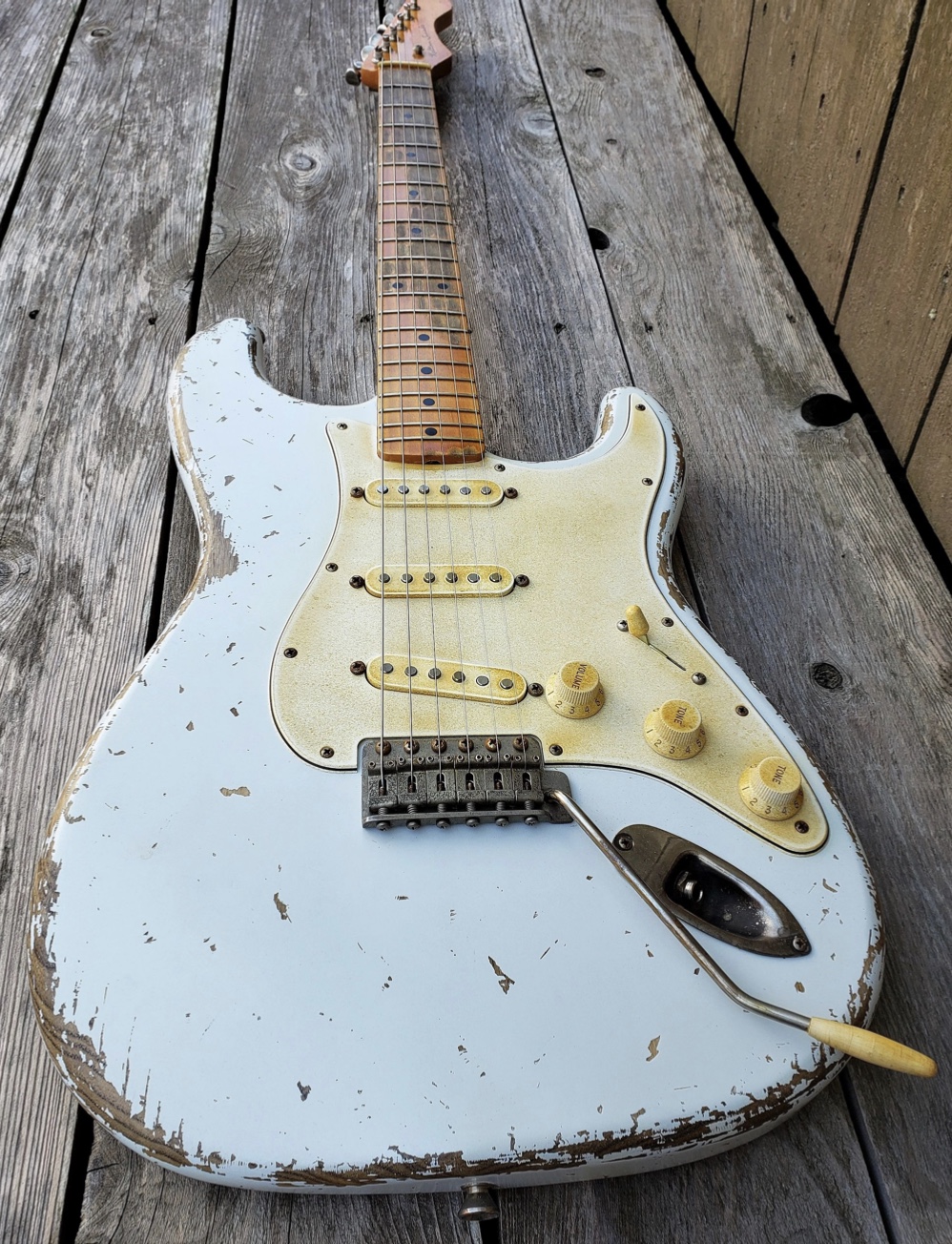 Question 2. Vintage Replica (VR) is the term often used today in place of relic. It more accurately describes a newer guitar while not posing as something ‘old that has survived’. They’re new guitars…let’s call them what they are! The quality available today with woods that can be dried, tortified, baked or re-claimed is astonishingly high. Electronic wizards like Lolar, Fralin etc…are able to recreate much of the tone we take for granted in actual vintage guitars. The types of metals and plastics used today are close relatives of daze gone by. So with all this fantastic ability to make new guitars so incredible, the term vintage replica is perfect! Think about it for a second…is their any reference to being ‘beat up’, banged up, scratched up, pounded on or worn to smithereens? No…the answer is NO. It could mean anything from almost perfect to heavy road-worn. Vintage, true vintage guitars come in all forms of aging…some were lightly played, some were road gigged 340 times a year, some were collected by non playing folks and some were simply home played and well cared for.

Question 3. Ok…here comes the stuff that will bring fire into the conversation! What is the purpose or…Why Indeed is the question. I could end it here with ‘why not’ (or) ‘just because’. Nawww…let’s get into it! As I have said in previous articles on my various websites, a guitar is like a blank canvas. It allows us to create music, tell stories and play with others…social distancing aside. A guitar is also a piece of art, something most of us love to look at, hold, admire and cherish. Art, object art…that can be both played and displayed, published, hung in a museum, living room or den. As someone who sees both sides, art for art’s sakes and playing guitar for god’s sake, I totally understand the purpose of relic’d or as I prefer to say, vintage replication. Here’s why. There is a certain intangible FEEL that is a game changer when you hold and play a vintage replica guitar…similar to that feel you get with a true vintage. This increases exponentially if the VR was built using old woods, swamp ash, gourmet pickups and quality hardware. Now, add a master painter/creator that not only understands what to do and how…but also understands tone. The “soul” of any great guitar is the tone, the sound, the playability…having the correct “look” is the pièce de résistance when all points come together. 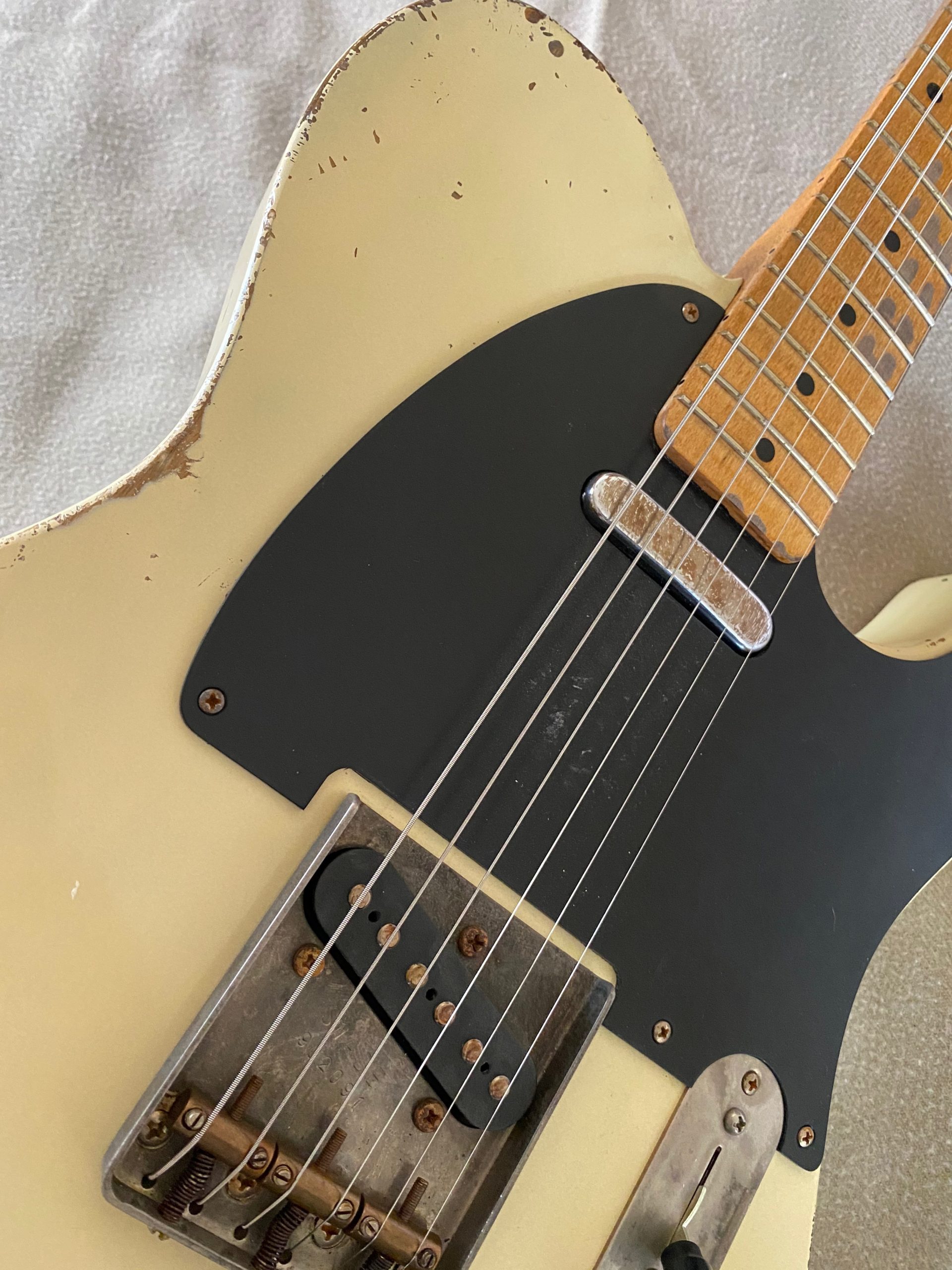 There…that wasn’t so bad afterall! Sometimes it’s all bout how we phrase things, which is why I love the vintage replica over the relic phrase to describe new guitar aging. I adore vintage guitars to pieces, and tend to buy fairly museum quality most of the time, but certainly not always. My favorite was an ES-335 (1961) that looked like a pepperoni pizza…but man could she sing. Equally, some rather museum mint 50’s and 60’s Les Pauls and Stratocasters are in the same “favorites” category. There’s room for both and all things in between. I had to come full circle with new guitars that are relic’d or VR guitars…truthfully I did. They looked like a truck ran over them while being set afire and tossed about! I felt it was such a waste of an otherwise beautiful piece…let it age naturally…I thought. I won’t say there’s not a part of me that still has a bit of that inside, however that stems more from the Fender and Gibson factory VR’s than special builds I have since cottoned to. Assembly line builds don’t have the hours put into them to create a vintage feel or tone in the same way a hand built VR can. It’s just not possible, so stop kidding yourself. 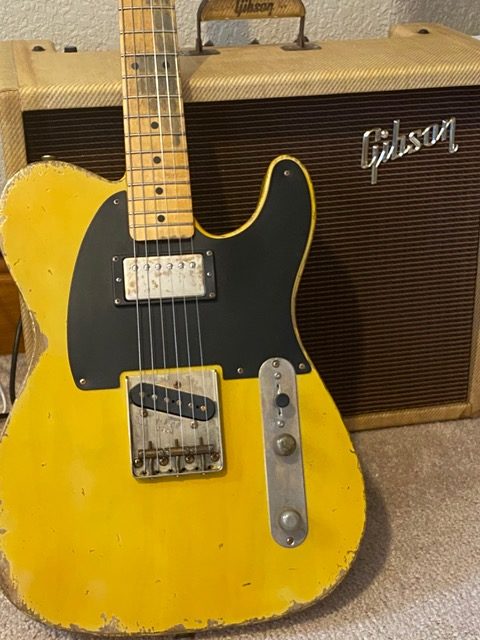 I have owned and played John English (RIP) made guitars that sold for ten grand or more…nice but not vintage. I own and play some VR’s made this year by a craftsman that does it all himself.. and by hand. No comparison to any factory instrument and these do truly play, feel and look like ones made in 1952 or 53…and for price point… not far off a Custom Shop assembly line guitar. Maybe less. Remember too, for every ten thousand CS factory built guitars made, there’s only a couple of boutique built guitars made…just look on Reverb or eBay…and then ask yourself “why is it so many are for sale”…I’m not referring to online or brick and mortar shops selling them, that’s our business…I mean just regular folks who bucked up and now wanna sell. 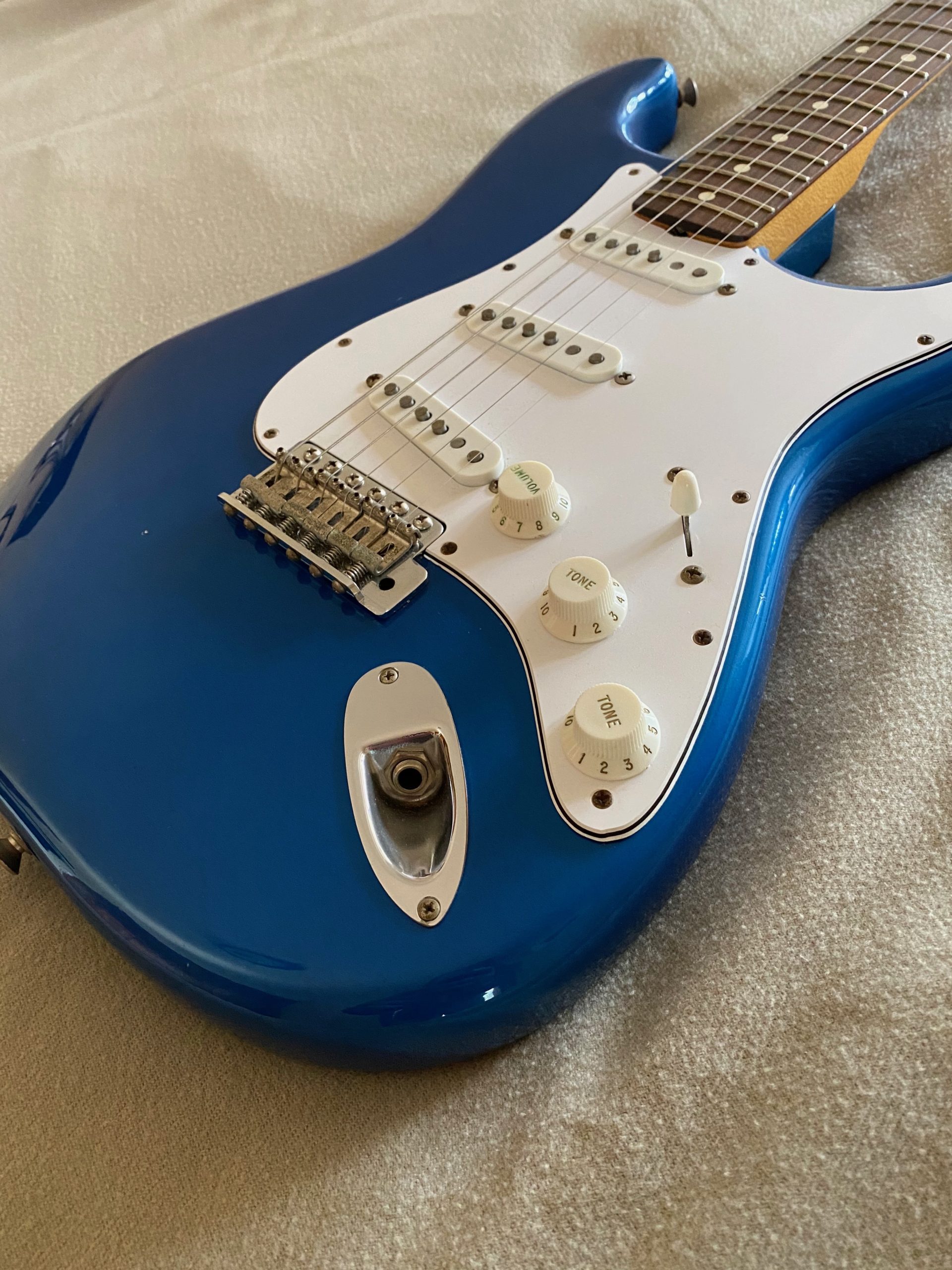 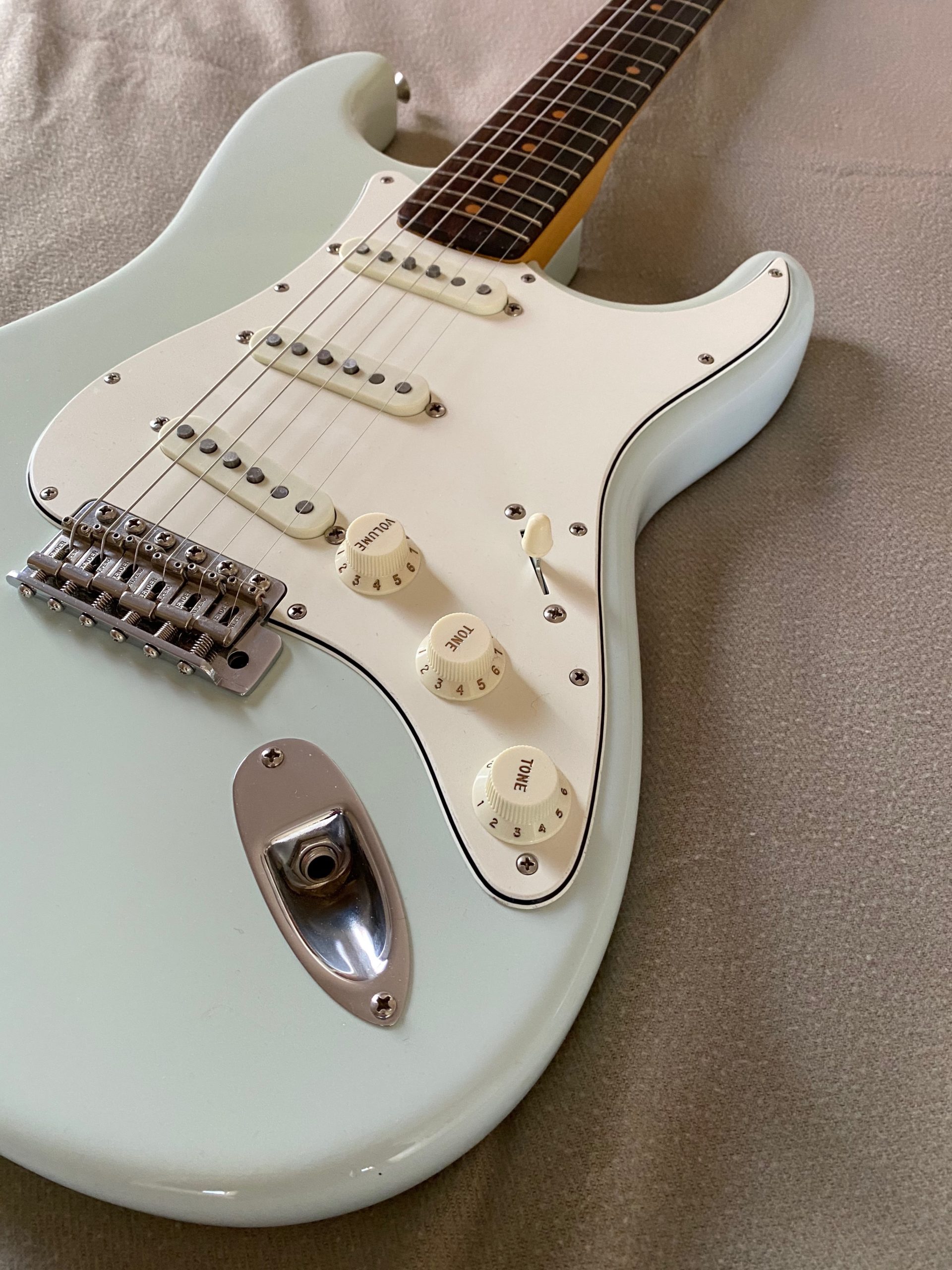 These are general rules of thumb…many many exceptions naturally exist. Fender made some incredible VR’s from 1982-1984 … absolute gems (I kept one). They also rise to the occasion every NAMM event with a handful of gems…but try and buy one. In all the years…decades even… I have only been able to buy one…they are snatched up before the show even starts! (still have it too).

In a wrap up, there are so many great choices and varieties of museum aged, relic, vintage replicas and just plain amazing guitars. The jackpot guitars today are Kelton Swade craftwork guitars…some lightly aged and others well worn…no matter the style there is room for them all…but don’t just take my word on that, try one for yourself!